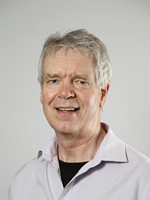 Brian Edmiston is Professor of Drama in Education in the Department of Teaching and Learning. His scholarship focuses on drama in language, literacy, and literature teaching, dramatic inquiry as a P-12 cross-curricular pedagogy, and drama as ethical education.

A former elementary and secondary classroom teacher, he regularly teaches and has conducted funded research in P-12 classrooms in central Ohio, England, and Northern Ireland. He has authored more than 40 publications including three books. Professor Edmiston directs the professional development of teachers at Ohio State in the Stand Up For Shakespeare program, part of the partnership between the Royal Shakespeare Company and the university.

In the Department of Teaching and Learning he teaches courses in the MA and PhD programs and runs the pre-service multiage MEd licensure program in drama education. In the doctoral program he is a core faculty member in two areas of study: Rethinking Early Childhood & Elementary Education and Adolescent, Post-Secondary and Community Literacies and is an affiliate faculty member in Multicultural Education & Equity Studies and Literature for Children & Young Adults.

In 2009, he received the Alumni Award for Distinguished Teaching. He was twice elected chair of Education & Human Ecology College Council, 2004-06. A former co-editor of Drama Matters and co-director of the Martha King Center for Language & Literacies, he has organized two international events at Ohio State: the 2000 International Drama in Education Research Institute, and the Dorothy Heathcote Seminar in 2007. He regularly presents and has been an invited keynote speaker at local, national, and international conferences.

Brian identifies as a British-Irish-American: he was born and grew up in Ireland, was a lawyer and then a teacher in England, and moved to the United States in the mid-1980’s. He studied for his master’s degree with Dorothy Heathcote, the legendary teacher and scholar of drama in education, and for his doctorate with Cecily O’Neill, the leading expert in process drama as an art form. After receiving his Ph.D. he was a faculty member at the University of Wisconsin-Madison for five years before returning to Columbus to join the faculty in the Department of Teaching and Learning in 1996. He is married with two children, plays the fiddle, likes to bicycle and sing, and is a Quaker.