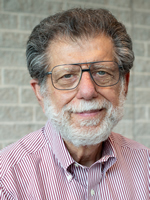 Peter V. Paul, PhD, is a professor in the Department of Educational Studies. One of his major responsibilities is teacher preparation for individuals interested in the education of deaf and hard of hearing students, especially in general education settings (MEd program in Hearing Impairment).

Paul has published extensively on English language and literacy development for individuals who are deaf and hard of hearing and has more than 200 publications. His current projects include research on the development of reading comprehension and literate thought, influenced by his major model - the Qualitative Similarity Hypothesis.

He is the current Editor of the American Annals of the Deaf (established in 1847), the oldest professional journal in the field of deafness. Dr. Paul has received the College of Education Senior Research Award (2000) and the Richard and Laura Kretschmer National Leadership Award in Hearing Impairment (2010; Ohio School Speech Pathology Educational Audiology Coalition [OSSPEAC]).  He has conducted workshops and presentations on an international, national, state, and local level in the areas of English literacy, inclusion, and literate thought.

Dr. Paul has a bilateral, profound hearing impairment and wears two cochlear implants. Dr. Paul is the father of a son, Peter Benedict, who has Down syndrome and autism.