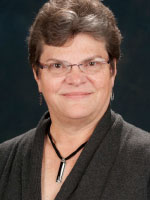 Dr. Nancy A. Rudd is professor of consumer sciences in the Department of Human Sciences. Her teaching and research interests lie in the area of appearance and human behavior, with emphasis on culture, body image, and personal aesthetics.

She teaches both undergraduate and graduate students, advises honors and graduate student research and teaches a general education course entitled "Appearance, Dress and Cultural Diversity." She currently teaches courses in the social psychology of appearance, aesthetics, and apparel product development and branding. She has studied body image for 24 years, focusing on the perceptions, attitudes and behaviors of many diverse groups of people.

She has received outstanding teaching awards in her college, and has received grants for curriculum development, research and outreach. She has published her work in several academic journals and regularly presents her research at national and international conferences. She serves as chair of the university Body Image and Health Task Force, which was founded in 1995, and is a member of the University Wellness Collaborative.