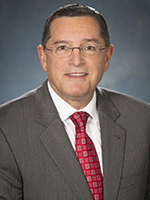 Dr. Carl Maresh is a professor of kinesiology in the Department of Human Sciences, also serving as director of the exercise science program and director of the exercise science research laboratories. His first professional appointment was director of the Health Institute at Saint Luke’s Hospital in Kansas City, Missouri. He was then recruited to the Midwest Research Institute (presently MRI Global) in Kansas City where he served as a senior research scientist in the departments of Bio-Organic Chemistry and Bio-Behavioral Sciences. Prior to assuming his position at The Ohio State University in 2014, Dr. Maresh was a Board of Trustees Distinguished Professor of Kinesiology at the University of Connecticut (UConn) where he held joint appointments in the departments of Physiology & Neurobiology, Nutritional Sciences, Physical Therapy, and the School of Medicine. As director of the Human Performance Laboratory at UConn from 1984-2014, and department head of kinesiology from 1998-2012, he was credited with bringing together a truly renowned group of scientists. As a result of focused teamwork, his department was ranked over a 10-year period (2005-2015) as the #1 kinesiology doctoral program, and most research productive kinesiology department, in the United States.

Widely acknowledged as an eminent scholar in exercise science, Dr. Maresh’s contributions have influenced the way people view the importance of exercise across the lifespan, including the efficacy of structured exercise in clinically compromised patients. His laboratory and fieldbased research on the physiological responses to different environmental stressors, and on optimum methods of nutrition and hydration, has greatly increased our knowledge of how the human body manages such challenges and has wide applications to gender-specific health, injury and disease prevention, and performance enhancement in both neutral and extreme environments. He has over 300 peer-reviewed scientific publications and been awarded millions of dollars in extramural funding, secured from government, corporate, and professional agencies.

Dr. Maresh has dedicated himself to comprehensively serving his research and academic departments, and his professional organizations. He proudly served as a member and/or chair of several IRBs for studies involving human subjects, spanning an 18-year period. He is a member of several professional organizations, having served in many capacities including membership on a national board of trustees, as president, and associate editor. Dr. Maresh has served on peer review panels and/or study sections for the National Institutes of Health, Department of Defense, and National Aeronautics and Space Administration. He is a Fellow in the American College of Sports Medicine and the National Academy of Kinesiology.