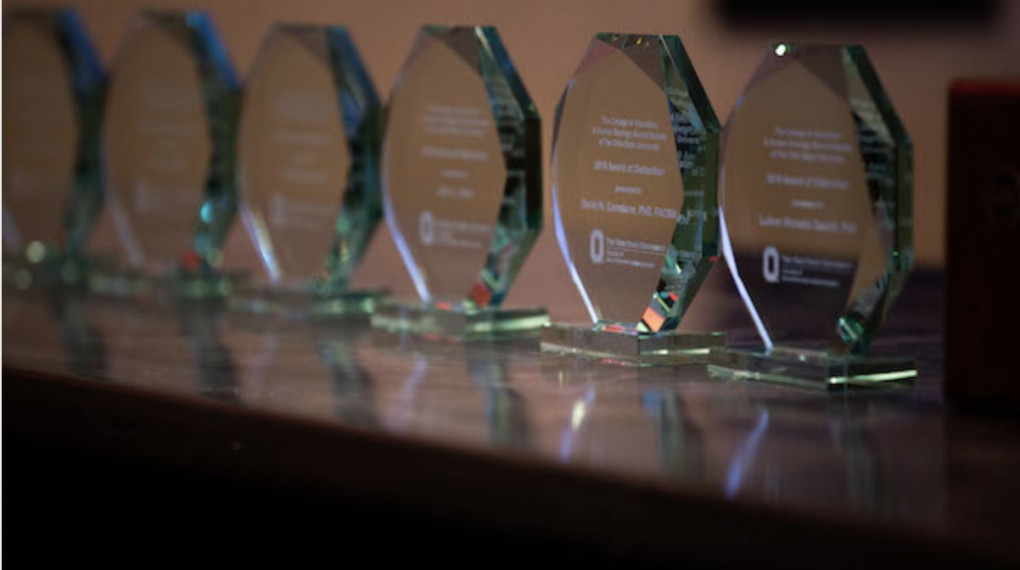 Hall of Fame and Alumni Awards

Each year, the College of Education and Human Ecology, in collaboration with the college’s Alumni Society Board of Governors honors alumni who have made outstanding contributions in their chosen fields, exemplifying the college’s legacy of service and excellence the globe.  The nomination period spans November to January each year, and winners are celebrated in an annual event that takes place during the spring semester.

Interested in nominating an outstanding alum? Check this webpage in November for a link to the nomination form.

Induction into EHE’s Hall of Fame is the highest honor bestowed by the college and alumni society. Those who are chosen for this award must have made significant contributions to education and human ecology and serve as a role model for all others in their fields. Hall of Fame inductees have distinguished themselves nationally or internationally by making a positive contribution to society and bringing extraordinary credit to the college and to The Ohio State University. They must be former college faculty members, administrators, or graduates from an education or human ecology program.

David Magill is an experienced educational leader who successfully bridged the differences between public and independent schools. After graduating from Ohio State, he taught elementary and special education students in the School District of Philadelphia before entering the administrative side of education as a principal and director of pupil services.

During this time, he completed an EdM in special education and an EdD in educational leadership and policy studies at Temple University.

These experiences prepared him to become a superintendent of three Pennsylvania school districts, consecutively, for a total of 20 years. At the time of his first position, he was the youngest superintendent in the state.

Magill next was chosen through a nationwide search to direct the acclaimed University of Chicago Laboratory Schools, which serves children from birth through high school. During his 11 years there, he achieved many firsts, including introducing the teaching of Mandarin Chinese, increasing the scholarship endowment by over 128% in five years, increasing student financial aid by over 300%, as well as increasing the enrollment of students of color by 10%.

In addition to expanding the school to over 2,000 students, he led a capital campaign that raised over $92 million against a goal of $40 million. As a result, Magill oversaw the building of a new early childhood education center and expansion of the historic campus to add the state-of-the-art Gordon Parks Hall. The building, designed exclusively for the arts, was the first on the University of Chicago campus named for an African American.

Upon retirement in 2014, Magill became director emeritus of the Laboratory Schools. He then was asked to serve as interim director of Chicago’s Academy for Global Citizenship for more than a year. Following this, the International School of Denver, Colorado, asked him to be interim head for 18 months. Upon completion of that role, the Laboratory Schools asked him to return, and he spent 16 months as its interim director during the pandemic.

In addition, for 18 years, Magill served on the board of the Educational Records Bureau in New York City, including as board chair for seven years. He appreciated the opportunity to work with a testing service that, rather than measuring learning, is diagnostic and prescriptive to determine instructional programs and curricula to help students learn.

The Career Achievement award honors alumni who have made outstanding contributions to their professions and a difference in the lives of others. The emphasis of this award is on teaching, mentoring, and sharing their skills and talents with others in their profession. 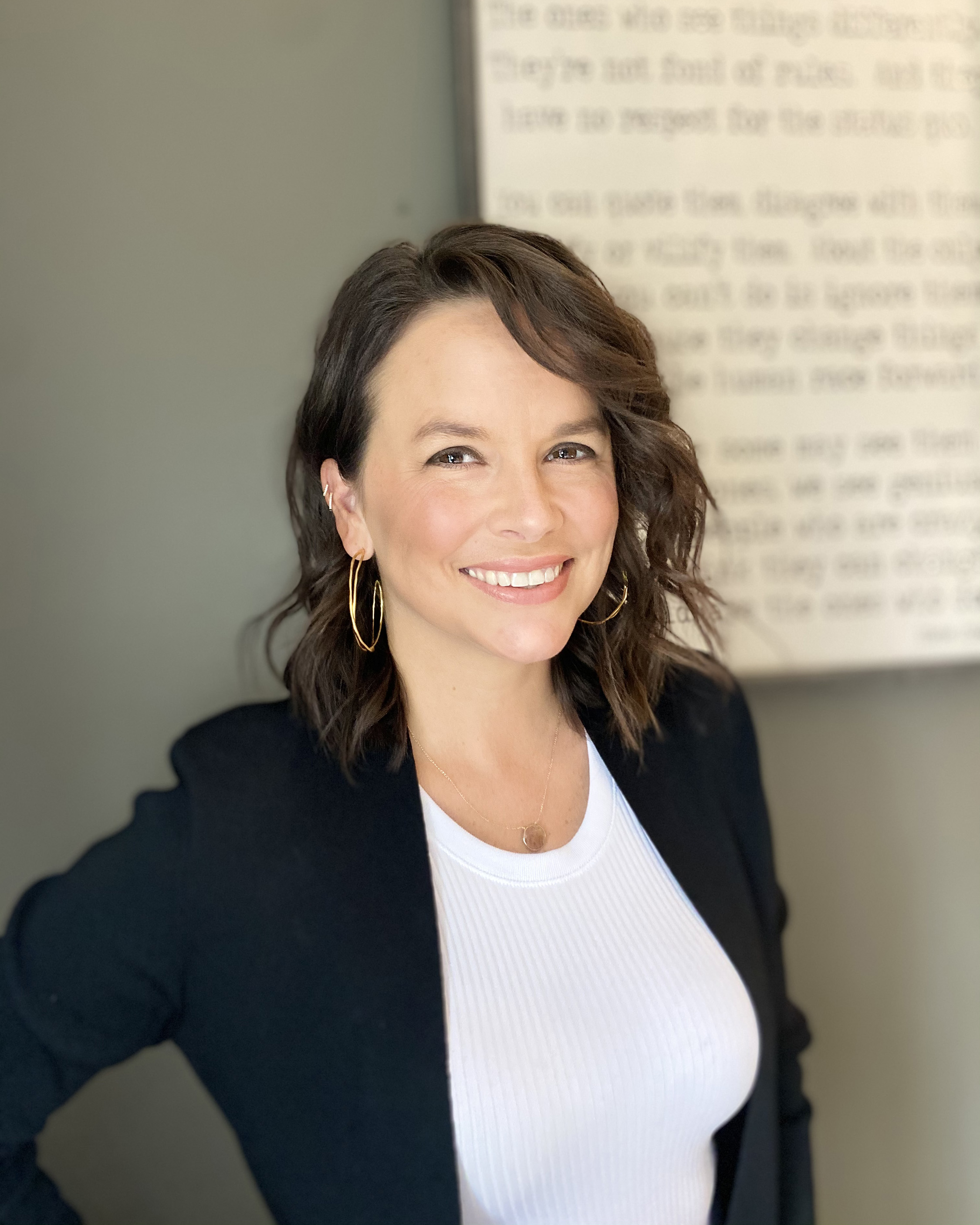 Kat DePizzo is the president of Justice Design Lab, where she leads a team of designers, artists and marketing professionals. They create and market all products for the Justice brand that are sold through Walmart and ShopJustice.com.

With an extensive retail background of 20+ years, DePizzo is a dedicated leader, brand creator and product visionary. Her passion for cutting-edge products and innovative design with a customer-focused lens has led brands to new levels of success in retail brick and mortar, ecommerce, franchise and licensing.

DePizzo’s retail career started at a young age with work in sales and visual merchandising for brands such as Levi Strauss & Co. and Max Studio. She earned her degree from Ohio State from the program then called Textiles and Clothing, with emphasis on product development.

After graduation, she worked for Abercrombie & Fitch for five years, during which she played key roles in the successful launch of Rhuel No. 925 and a booming business in Abercrombie Women’s design.  After working with several independent brands, she eventually planted her feet with Limited Too Brands in the early 2000s.

Fast forward 14 years and DePizzo successfully developed, built and expanded the Justice brand to its peak as the No. 1 tween brand in the United States.

DePizzo has always been a leader who feels the most successful when her team thrives.
Witnessing an individual find their purpose is her mission, and she constantly works to build up those around her.

Beyond work, DePizzo volunteers in her community with schools and organizations focused on diversity, inclusion and mentorship, investing her time to generate more for future generations. 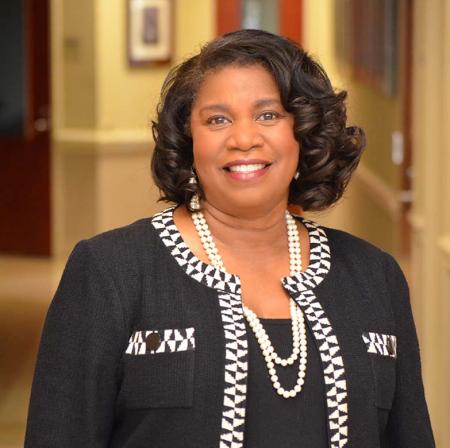 Marcia Millet is a seasoned educator and administrator with more than 30 years of experience. A native of High Point, NC, her work experience ranges from teaching elementary school to university administration. She currently serves as assistant dean of the Graduate School at Tennessee State University. Prior to that, she was the department head and professor in the Department of Teaching and Learning.

After studying at Ohio State, Millet received her EdD from Tennessee State University. She completed postdoctoral work at Harvard University through their Women in Education Leadership Program, as well as received administrative training through the Emerging Leaders Institute sponsored by the American Association of State Colleges and Universities.

Millet has received numerous accolades for her accomplishments: these include being recognized as a National Science Foundation Finalist for the President’s Award for Excellence in the Teaching of Mathematics for the State of Tennessee.

She continues to make significant contributions to her chosen field. She currently serves as a math consultant for the Educational Testing Service, a site visitor for the Council for the Accreditation of Teacher Preparation and a grant reviewer for both the National Science Foundation and Tennessee Department of Education.

Millet was recently appointed to the inaugural editorial board for the Journal of Trauma Studies in Education and serves on the editorial review board for the Caribbean Educational Research Journal. She serves on the board for the Tennessee Higher Education in Prison Initiative and was invited to participate in the 2020/2021 NCURA Region III Research Administration Mentoring Program. She also coordinates a STEAM academy for girls for the Parthenon (TN) Chapter of the Links, Incorporated.

In grant awards, Millet and her team collaborated with the Educational Testing Service and received an $8 million grant for a STEM project with a goal of increasing the math proficiency of pre-service and in-service teachers in Tennessee. She received a 2020 Noyce Capacity Building grant entitled “Exploring Partnerships to Build Trajectories into STEM Teaching Professions” from the National Science Foundation.

Millet is a recurring plenary speaker at Ohio State’s Newark Regional Campus, where she shares information on diversifying curricula and BIPOC communities. 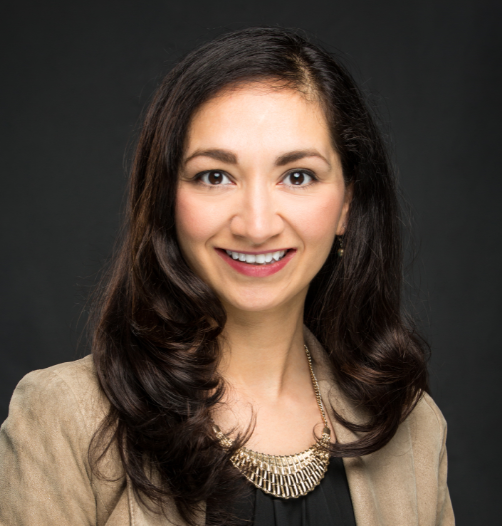 Triple Buckeye Tracy Nájera dedicates herself to improving the lives of children and families and serving as a tireless advocate for education equity. She believes that one’s race, zip code, ability status or gender should not dictate opportunity and access to an outstanding education.

Having grown up in a small town with under-resourced schools, she recognizes the power of quality teaching and supportive adults who partner with parents to create thriving educational communities.

Upon enrolling at Ohio State, Nájera threw herself into community service and student leadership. As a result, she earned the Presidential Leadership Citation from the university.

After completing her undergraduate degree in international studies and her MPA from the Glenn College of Public Affairs, Nájera turned her passion for service and advocacy into her professional journey as a research fellow with the Children’s Defense Fund  ̶  Ohio. She also spent time as a senior director for Battelle for Kids.

While working at Ohio’s Office of Budget and Management, Nájera decided to pursue a PhD in the college. Today, she serves as executive director of the Children’s Defense Fund – Ohio. She leads the work of the nonprofit child advocacy and civil rights organization, which has focused relentlessly for more than 40 years on health, education equity, child welfare and nutrition with the goal of ending child poverty in Ohio and in the United States.

Nájera’s continued passion for service to Ohio includes appointments to the State Library Board and the state’s 2020 Census Complete Count Commission. She also serves on the board for Mt. Carmel College of Nursing, Columbus Rotary Club, Policy Matters Ohio, the Human Services Chamber and the Glenn College Alumni Society.

In recognition of her professional work and community service, Nájera was named a Columbus 40 under 40 in 2014 by Business First. She was inducted to the Noble Order by Alpha Psi Lambda, Inc., in 2015, and recognized by the Office of Diversity and Inclusion at Ohio State in 2017 with the Distinguished Latinx Service Award.

The New Leader award is granted to alumni who are age 36 or younger and have already made significant professional accomplishments. Recipients of this award show great promise for continuing their contributions to their professions, the college, and society. 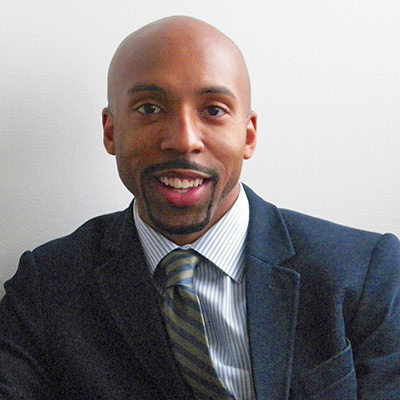 DeLeon Gray is CEO of Black and Belonging and an associate professor of educational psychology and equity at North Carolina State University, where he has developed three new doctoral courses on School Belonging, Equity-Focused Quantitative Methods and Community-Engaged Approaches to Educational Research. He is enthusiastic about working jointly with education stakeholders to disrupt structural aspects of schooling environments that leave historically marginalized student groups vulnerable to anxieties about belonging.

His research is recognized by prestigious honors, including the Research on Socially and Economically Underrepresented Populations Award (RISE-UP) from the Association for Psychological Science and a 2018 Best Article Award for his collaborative publication, "Black and Belonging at School: A Case for Interpersonal, Instructional, and Institutional Opportunity Structures," in Educational Psychologist.

Gray has been establishing a national presence for his research, mentoring and outreach activities. To date he has secured more than $2.5 million in federally funded research grants as principal investigator or co-principal investigator. The overarching aim of his grant-funded community work is to amplify the voices of young people and support their motivation to achieve for the sake of racial progress and social uplift.

For Gray and his team, centering community engagement has resulted in several (intended and unintended) impacts for both his partnering schools in Durham, NC, including:

Black Enterprise featured Gray as one of 100 men of color who are "living up to a standard of excellence and using their talents and influence in their respective industries to shift the perception of men of color to create and encourage a positive narrative."

Most recently, he received the Change Agent Award of Appreciation from St. Augustine’s University in Raleigh, NC, for his community-engaged scholarship in predominantly Black K-12 schools. He recently served as a Scholar in Residence in the College of Education, Michigan State University. He earned his Bachelor of Arts in Interdisciplinary Studies from the University of Maryland-Baltimore County.