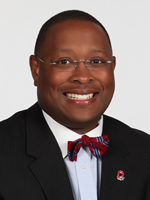 James L. Moore III joined Ohio State's faculty in 2002 and served as a rotating program director for Broadening Participation in Engineering in the Engineering directorate at the National Science Foundation in Arlington, Virginia. He concurrently serves as the Vice Provost for Diversity and Inclusion and Chief Diversity Officer, the inaugural Education and Human Ecology (EHE) Distinguished Professor of Urban Education and executive director of Ohio State's Todd Anthony Bell National Resource Center on the African American Male. In addition, from 2011 to 2015, he served as the associate provost for diversity and inclusion.

He has taught undergraduate and graduate students at Ohio State and is internationally recognized for this work on African American males. His work is widely published and has appeared in more than 100 publications. He also has garnered more than $9 million in grants and contracts and given more than 200 scholarly presentations globally.

Among his many honors and recognitions, this week the American Educational Research Association (AERA) announced that James was selected as a recipient of its Scholars of Color Mid-Career Contribution Award and the Multicultural/Multiethnic Education Special Interest Groups Dr. Carlos J. Vallejo Memorial Award for Lifetime Scholarship. Additionally, he is an American Council on Education (ACE) Fellow, Big Ten Academic Alliances Academic Leadership Program (ALP) Fellow, and American Counseling Association (ACA) Fellow. In 2011, he was bestowed a proclamation from the Ohio House; in 2014, a resolution from the Columbus City Council; and in 2015, a key to the City of Spartanburg, South Carolina.