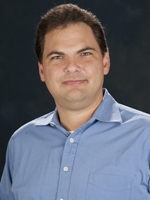 Robert Scharff is a Professor in the Department of Human Sciences at The Ohio State University. He earned a PhD in economics from Duke University and a JD from George Mason University School of Law. Prior to his employment at Ohio State, Scharff was a regulatory economist at the U.S. Food and Drug Administration.

Scharff’s research is focused on the economics of risk, with special emphasis on risk from consumption of food and other related products (e.g. food safety and obesity). His research has been funded by USDA, USAID, the Bill and Melinda Gates Foundation, the Association of Public Health Laboratories, The Produce Safety Project and the Ohio Agricultural Research and Development Center.

Scharff serves on the editorial board of Journal of Food Protection and the Journal of Consumer Affairs. He enjoys teaching classes to both undergraduate and graduate students.